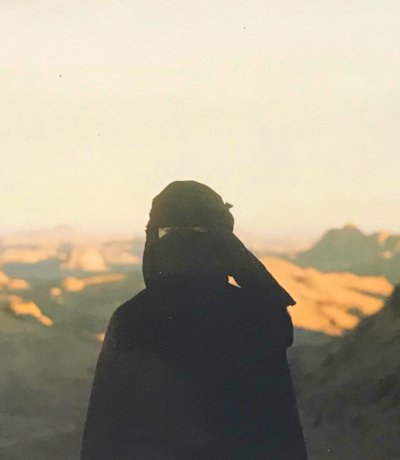 The Hoggar is really magic.

Each place has a unique and unmistakable spell like the one I found in Hoggar because it manages to capture all the senses, not just the sense of smell.

Although many years have passed since I went there, my memories are still very vivid.

At that time I was living in Paris and a dear friend of mine, Fabrice, suggested that we travel together to the heart of the Sahara desert, following the path of Charles de Foucauld who lived in the Hoggar mountain reef where he found his faith.

The idea of ​​living this “mystical” adventure really captured us so we had no problems convincing our friends and my twin brother Ranieri, to join us.

Our expedition group was finally ready for the big journey!

Our pilgrimage in total silence.

The first stop of our adventure was Algiers, my hometown. We then went to Tamanrasset, the starting point of our pilgrimage to follow the footsteps of the hermit father. In this remote village with so many thatched roofs and misery around, we joined two Tuaregs with their camels.

For a week these two blue turban princes would have opened the doors of the desert for us. They were our physical and spiritual guides. Our faithful travel companions.

We walked more than 20 km a day, following each other, without saying a word. The silence was broken only by some unexpected encounter.

I remember the incredible emotion when at a certain point we saw a little boy coming out of nowhere handing us, with an amazing smile, the most precious possession he was holding in his hands: a bowl of water. The only sound that was heard echoing in the valley was the click of my little camera.

The nights in the desert are so magical. We usually prepared our shelter before it got pitch dark even if we slept under the stars. We ate next to each other with a lit torch and a small fire to keep us warm.

At a certain point the magic happened: our targhi friend screamed “Tillit” looking at the sky, as if by magic, the moon appeared. Its beam suddenly illuminated every rock, grain of sand and human face.

At night we slept protected in our sleeping bags. The landscape around us was transformed into a theatrical scenery lit by the stars. They felt so close that you could touch them with your fingertips. A show of light, peace and silence that I will never forget.

As in the famous desert trip of the Little Prince of Saint Exupery, we travelled through vast silent and enchanted valleys with the eyes of children, fascinated by what was around us.

I remember that amazing feeling of inner stillness, punctuated by our slow progress towards our goal: to reach the top of the Hoggar.

We reached the peaks of the Hoggar on December 31st. There, at about 2800 meters above sea level, in this magical wasteland, dominated by a harsh and lunar landscape, Charles de Foucauld chose to lead his life as a hermit.

The Assekrem plateau, which in Tamasheq language means “end of the world”, literally took our breath away due to its extreme beauty.

We spent the most beautiful New Year’s eve of our life, with lights and colors never seen before.

I felt, for long and indescribable moments, my soul reborn.

The real desert is within us.

I remember an interesting part of Saint Exupery’s novel, when the Little Prince asks the snake: “Where are the men? You are a bit alone in the desert …” and the snake replies “You are also alone with men”.

An answer that, after having lived the desert experience, I have kept inside me together with my baggage of memories and emotions. Because, strange as it may seem, there was not a moment when I felt alone.

The desert fills your soul, much more than the many things and situations that crowd your everyday life. The absence of them is filled by everything else.

City lights, cars, noises, people disappear. And it’s just you, your footsteps on the sand, your breath and your heartbeat.

This weekend I would like to explore with you some mystical places.

Some places have the extraordinary power to enrich not only your life but also your soul. The Hoggar Desert is one of them. I managed to capture the most intense moments of that trip with my little analog camera, that you can find published on my Instagram page.

After the journey in the desert, I will show you many other mystical places in Europe, where you can recharge and, why not, reconnect with yourself.